IPv6 Multicasting is something that's been confusing me a bit lately.  I think I finally have the basics figured out...  And I'm going to put there here so that you can read all about it.  Because you want to read all about it. Don't you?

I'm using a simple 3 router topology: two Ethernet links, and a Frame Relay link between R2 and R3 using physical interfaces (multipoint); Inverse ARP has been disabled.  The addresses all have the router number as the last chunk (chazwazza?). OSPFv3 has been spun up with everything in area 0 to give PIM something to work with.  I've also added some loopbacks. 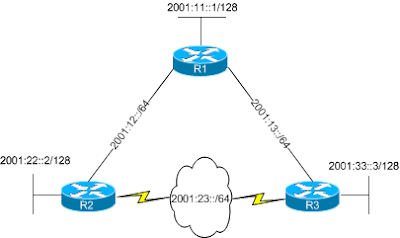 This post is assuming that you know how to get this far...  I'm not going to cover how to get OSPFv3 running properly here.

To get started the first thing we need to do is enable IPv6 multicasting on each router:


Easy enough so far.  But there's a few differences in what you're going to do next compared to IPv4 multicasting.  In IPv6 PIM is automatically enabled on every interface that's already running IPv6, and it's running in what we all know as "Sparse Mode".

At this point you should start seeing some tunnels appear.  These tunnels are used by the routers to talk to their RPs.  The PIM REGISTER and PIM STOP messages are sent over these tunnels.  For now the tunnels will be up/down, but that will change once we get the RP information distributed to our routers.  We're going to do that next.

IPv6 PIM can use a couple different methods to distribute RP information.  There's the same BSR we all know and love from IPv4.  There's also static RPs.  Lastly, a new method is embedded RP where the RP address is actually directly in the multicast address that a receiver wishes to join.  Gone is Auto-RP and the sparse-dense nonsense that accompanied it (or Auto-RP listener alternatively).

For this post I'm just going to use BSR.  Static RP is self explained, and embedded RP would be a post in itself.


Just like always, you can set a priority (default is 0, highest wins) and a hash mask. You can verify your BSR configs and information distribution with the following command:


Next we need to define our RP.  I'll use the loopback of R2 as my RP.

It's at this point you should start seeing those tunnels that were created earlier transition to the up/up state (that is if everything is working properly).  If they don't then you most likely have an RPF failure somewhere and it's off to debug land to troubleshoot the problem.

Normally I'd like to so a little verfication at this point.  As of yet I haven't really found comparable commands in IPv6 PIM to what I'm used to in IPv4...  And it really irks me. There is this command:


But as near as I can tell that's only good on the C-RP itself!  It won't show you other C-RPs, and if we try on a different router, like our BSR, it shows nothing at all!


But this one only works on the BSR!  If you try that on anther router, even the RP itself, you get squat.


I clearly must be missing something here.  There just doens't seem to be the equivilent to 'sh ip pim rp map' anywhere.  So how do we verify that we have a working RP short of joing a group somewhere and firing off the traffic?  Well, we can look at our tunnels of course!


Ah HAH!  The first tunnel is obviously Embedded RP related, but the second tunnel is between R1 where we ran the show command and the the RP that we configured on R2!  We can take this a bit further and look at the tunnel itself to try and glean a little more information.


We can see our tunnel is up/up, we have valid source and destinations, and the tunnel protocol and transport are PIM and IPv6 respectively.

OK, everything is looking good.

If our RP wasn't configured correctly, for whatever reason, the tunnel would not be present on our routers at all.  Neither of the above commands would give us any information at all.


Finally, let's have one of our routers join a group (using MLD, not IGMP)


And then fire off some pings (because that's how network admins roll).